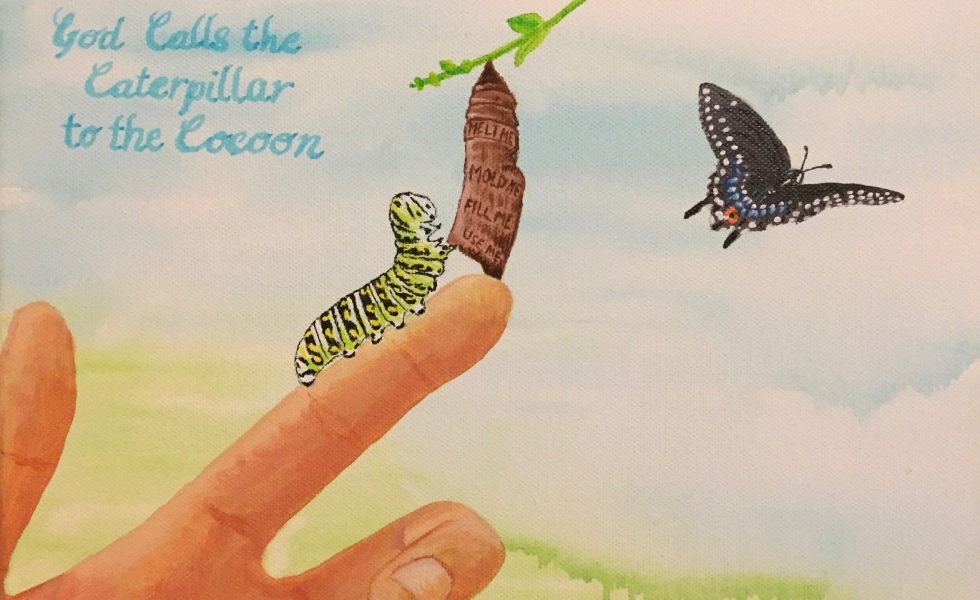 “God calls the caterpillar to the cocoon.” That sentence came to me with the force of a revelation of special meaning. To most people it sounds odd, banal or silly, to others obvious. But to me it was a thunderbolt, a pronouncement that explained what was happening to me.

It was in 2013(?), when I was immersing myself in literature from the Christian contemplative tradition and starting to learn related practices, such as centering prayer and personal silent retreats. The church traditions I had been a part of throughout my teens and adult life had been ill at ease, even mistrustful of silence. In services or small groups, we rushed to fill any awkward pauses, considering them to be, well … awkward. Even our personal devotions were packed full of words, of daily Bible reading plans and devotional books, of working our way through prayer lists, as if our time with God was about how hard we were working at it, about much we could accomplish in his name.

If God handled transformation the way we tend to handle spiritual growth, what would it look like? Perhaps he would make the caterpillar feel guilty for its caterpillar nature, glue a couple of wings to its body, tell it to go to church, pray and read the Bible every day, believe and confess hard enough, then jump off the leaf and fly?

This strikes me now as a very “caterpillar-y” approach to spiritual growth. It’s not that I regret any of the effort I put into my personal devotions in past seasons of my life. On the contrary, I’m very grateful for the foundation it laid, particularly in the familiarity and love it created in me for the riches of the Bible. But now I was feeling drawn — even called — to enter the cocoon, a place of silence and solitude, a place not about doing, but about yielding. A place of slow but profound transformation.

Maybe work in Mary and Martha? How most women will say they identify with Martha — and are rewarded for their Martha-ness, not for Mary-ness! Martha = caterpillar; Mary = chrysalis

Liminal time: Once the skin splits, there’s no going back to the life and self that has been, but it is not yet clear what I am to become. Like the moment after the trapeze acrobat has let go of one swing, but the other one has not yet reached its full arch, so the acrobat cannot even see it yet. It is a time of uncertainty, a time of waiting and hope, but also stress and doubt. Like this pandemic. “The space between no longer and not yet.”

Why? Because, while butterflies will visit and sip from any number of nectar flowers, a butterfly will lay its eggs only on one or a handful of types of host plants — and those plants are different for each of the many species of butterflies. When the eggs hatch, the tiny, barely visible little larvae start munching on the leaf on which their wise mother laid them, because that’s the only kind of plant they can eat. FUN FACT: How does a butterfly know when she has found the right kind of plant on which to lay her eggs? She tastes it — with her feet!

I call it my butterfly garden,
but truth be told,
it is a caterpillar garden.

And that’s the one thing that caterpillars are very, very good at: eating. That’s their job as caterpillars, to eat and grow, eat and grow. The bigger they grow, the more they eat. And the more they eat, the bigger they grow. They will shed their skins several times, sometimes changing their appearance in more ways than just size, as they progress through the larval stage.

And before you know it, they may have eaten your host plants down to mere sticks! I’ve had Gulf fritillaries decimate whole passionflower vines, but the most notorious are our beloved monarchs and their host plant, milkweed. You know you’ve become a real butterfly gardener when you have to make an emergency run to the garden store asking frantically where they keep the milkweed! Having watched them with fascination for a few weeks, they’ve become like your children — and you can’t watch your children starve!

To me, caterpillars symbolize us in the first part of our lives. There are these important tasks that we have to tackle: going to school, finding an identity, becoming independent, forming/raising a family, establishing a career. It’s exhausting! and it takes a lot of perseverance. I can identify with the caterpillar’s single-minded, task oriented determination. I remember feeling like I never had a moment to rest, no chance to just stop and look around. I don’t know how much a caterpillar can see or sense, but for most of its existence in that stage, it does not seem interested in anything but the leaf it happens to be on — until it runs out of leaf to eat or encounters some competition from another caterpillar. Then it will crawl away to find the next available leaf, and when it finds it, it will get back to the business of consuming and growing. It’s a caterpillar. That’s what it does. That’s its job. And it’s beautiful in its own way.

It just doesn’t yet know what God has in store for it.